Suan Luang Rama IX, also referred to as Rama IX Park, is a public park in Bangkok‘s Prawet District. With an area of 500 rai, it is the largest park in the city. The park was built to celebrate King Bhumibol Adulyadej’s sixtieth birthday in 1987, and was opened by the King on 1 December that year. 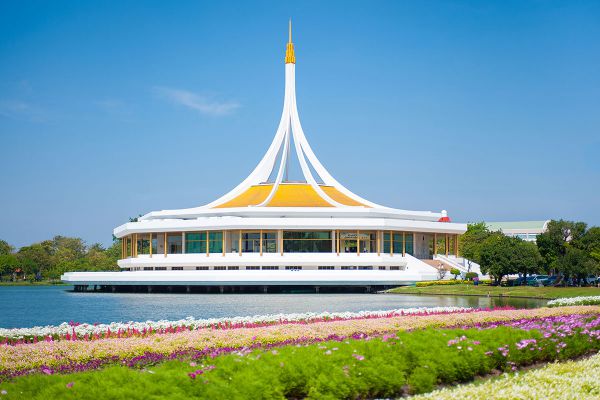 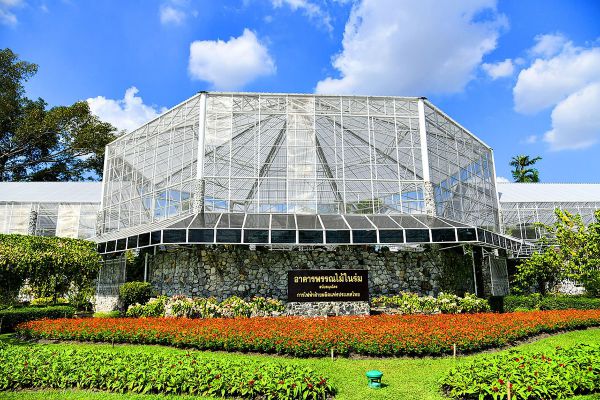 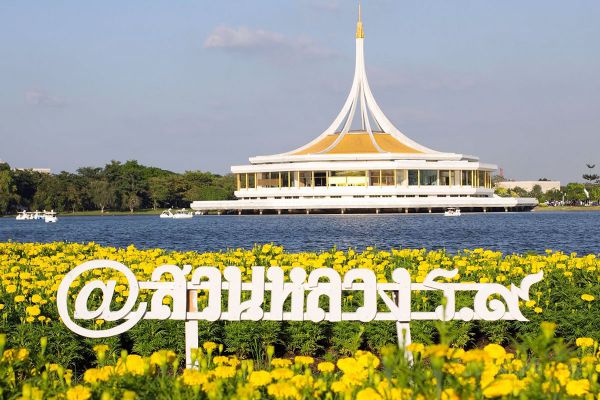 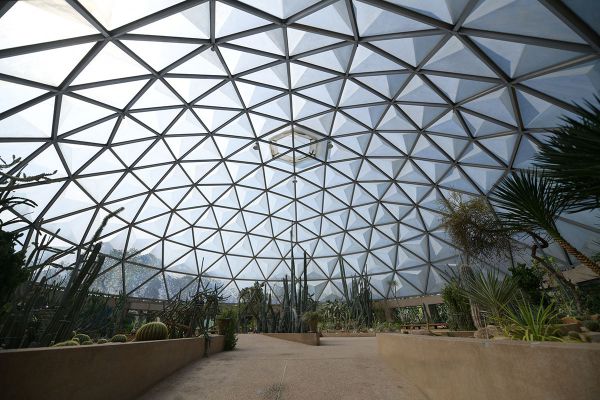 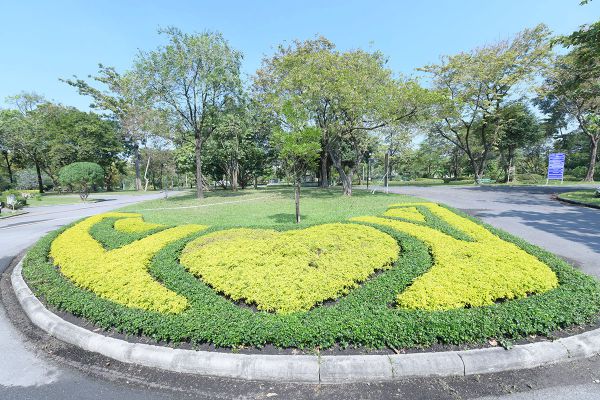 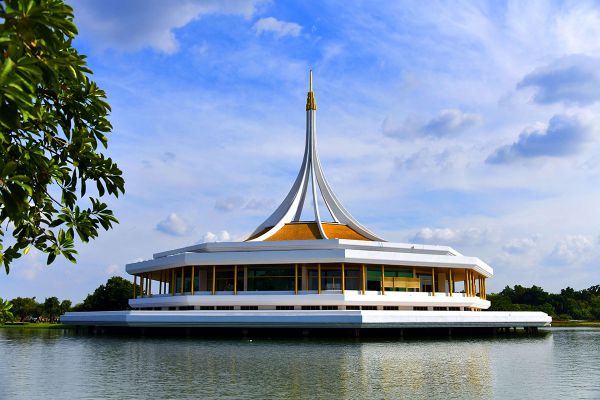 Area 1-The Garden of the Great King. Taking up an area of 21 rai, the Garden of the Great King is home to the Ratchamangkhala Pavilion, In front of the Pavilion is the Ratchaphruek (Cassia fistula) garden and three large ponds with fountains that have been beautifully decorated with flowering and ornamental plants. The pavilion’s interior contains nine mirrored rooms that exhibit various facts of His Majesty’s life, artefacts and background information on projects initiated by the royal family. There is also a meeting room with seating capacity of 500.

Area 2-The Botanic Garden. The garden is within an area of 150 Rai and houses a massive collection of plant species. Organized by their taxonomic and ecological settings, the plants are used for reserch, conservation and education purposes. A herbarium, library, and the office for the garden’s administrative and technical staff can also be found within the Botanical Hall. Ferns and Orchids Greenhouse, Indoor Plants Greenhouse, Geodesic Dome and the Pavilion in the center of the Lotus Pond, otherwise known as the Thakon Phrakiat Pavilion. The pavilion is used as a conference or seminar centre. The Office Building of the Public Parks of Suan Luang Rama IX Public Park owned by the Bangkok Metropolitan Administration, its primary responsibility is the upkeep of the garden as well as tree planting and seed propogation.

Area 3-The Reservoir (Traphang Kaew Keb Nam). An initiative of His Majesty, the Reservoir was built to minimize the impact of flooding in Bangkok’s eastern suburbs and covers 40 rai in area. Today, the reservoir is popular for water sports. Chai Chon Pavilion, situated on the north bank of the Reservoir, consisting of executive Committee of Suan Luang Rama IX Public Park Office, a souvenir shop and restaurant.

Area 4-Romanee Garden. Using up an area of approximately 50 rai. Romanee Garden was designed to resemble natural habitats and environments found throughout upcountry Thailand. Rocks, plants and flowers were taken from difference part of the country and arranged to imitate natural scenes thereby transporting the visitor into the beautiful forests of Thailand. The mountains, waterfalls, and creeks were placed in the center of the garden. And fragrant plants have been planted around Phut-Chan Pavilion. We can see the commemorative sculpture, depicting the activities of Her Majesty the Queen on the bank of the Reservior.

Area 5-The Water Garden. The water garden occupies an area of approximately 40 rai, With a royal command from His Majesty the King, Water Garden was created to resemble a natural ‘Phru’ (bog) habitat and home for aquatic fowl and other aquatic species. Visitors to the garden can study the behavioural patterns of its in habitants and learn about the different plants and their purposes.

Area 6-The Sanam Rasdara and Sport Center. The Sanam Rasdara and Sports Centre covers an area of approximately 70 rai. The musical pavilion and large lawn in front is used as an outdoor stage for various performances. The lawn is also used as a market place for ornamental plants during the ‘Magnificent Plants that Beautify the Suan Luang Rama IX Flowers Festival ‘ held in early December. The Sports centre includes a swimming pool and tennis courts.

International Garden
Further to six aforementioned areas an international garden featuring arrangements from different regions of the world can also be found in Suan Luang Rama IX Public Park:
– Chinese garden and Japanese Gardens are representing the eastern countries of the world.
– Spanish, English, French and Italian Gardens are representing countries of the western world.
– The United States of America is represented by Geodesic dome used for planting drought-resistant plants such as cacti.

Sai Rung Waterfall is in the area of Ramkhamhaeng National Park, Sukhothai. It is a waterfall with streams flowing down…

Salak Phet Temple is located on the other quiet, less tourist side of Koh Chang. There are statues of gods…